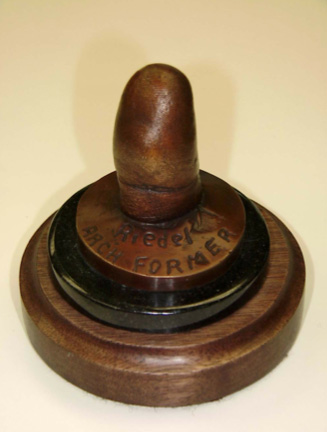 First, second and third order bends needed to be placed in the arch wire. It wasn’t in the brackets! Dr. Richard A. Riedel was the Chairman of Orthodontic Department during this time and supervised the seminar and clinic on Friday mornings. Dick had his own unique mechanics, which required some intricate wire bending. He always had two pliers in the right pocket of his white clinic coat, a 139 bird beak and a 325, manufactured by Henry General, a one man plier factory. According to Dick Riedel, there was no better plier. Many UW alumni agree and are still using their Henry Generals, purchased during or shortly after their residencies. Dick needed no other pliers to form an archwire, not even cutters. However, he did use his thumb. We would marvel at his ability to take a seven inch piece of .019 x .026 stainless steel wire and wrap it around his thumb to achieve his initial torqued arch form. His wire bending ability would mesmerize us and his thumbs seemed bigger than life. Not because his thumbs were large, only because of what he could do with them.

The Class of 1968 decided to memorialize Richard Riedel’s thumb. One day Barry Cutler went into Dick’s office with a small paper cup filled with freshly mixed alginate and asked him to insert his thumb. Each member of the class then had a plaster ‘Riedel Arch Former’ to remem- ber Dick and their residency.

There are not many plaster thumbs remaining, but Dr. Bill Sproule, of Vancouver, BC, still has his, which he loaned to me for duplication. I cannot remember exactly when, but sometime in the ’90s, I contacted Dr. Don Gardner, Class of 1979, Littleton Colorado, whose avocation is bronze sculpture. He volunteered to have some sample bronze castings made mounted on a base, a paper weight remembrance of the most memorable of our residency mentors. With samples in hand, I went to the UW Ortho Alumni Board and proposed that we have additional castings made. They agreed, thinking any alumni who benefited from Dick Riedel’s tutorage would want one. Don Gardner, when asked what the charge was for the two boxes of arch formers, said “nothing, it’s my contribution to the alumni”. Thank you Don.

While the original goal was to sell the thumbs as a memento of UW Orthodontic residency, they have been used over the years as special gifts to various people. Five or six per year have been presented to graduating residents on Thesis Day. Unfortunately, each year, fewer and fewer of our alumni have had the benefit of the wisdom of Dr. Richard A. Riedel in our training. Those of us who did, freely share the orthodontic pearls communicated by Dick. Comments like “The biggest benefit of a positioner occurs while you are waiting for it to come back from the lab.” and “If you have lower incisors, you will eventually have lower incisor crowding.” Or instead of making a critical comment about a presentation, he would just respond “Interesting”. The bronze thumbs are a reminder of the relationship we had with Dr. Richard A. Riedel and what we fondly called “Riedel wonder wires”. Thank you Dick.